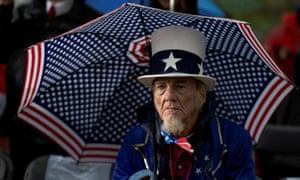 ‘One America is largely urban, racially and ethnically diverse, and young. The other is largely rural or exurban, white and older.’ Photograph: Hannah Beier/Reuters

America will still be America. But it is fast becoming two versions of itself. The open question is: how will the two be civil toward each other?